100 Minutes is about how long it took me to vote today. For the mathematically challenged that’s 1 hour and 40 min. There were forecast of lines lasting three hours or more. Thank goodness it wasn’t like that in my area. Truthfully I was more than prepared to wait the three hours or more. Today was SO important I would have done it. I was even hyped to do it. Today was like Christmas morning I couldn’t wait to get up and cast my vote. As excited as I was, there were people there more excited than I.

There was shouting as people left the polling place, several people were taking pictures with cell phone cameras; there were even some video cameras. As a filmmaker I thought about taping the event, but I KNEW there would be many others taping and I predict that by this time tomorrow they will be like a zillion of ‘em on YouTube. The people were excited though and several even honked their horn at the line as they were leaving. One woman even had her music turned up and played a tambourine in one hand while she drove with the other, I kid you not. You can’t make stuff like that up.

Even though I didn’t videotape the event I did document it in my own way.

This is my ballot before my vote 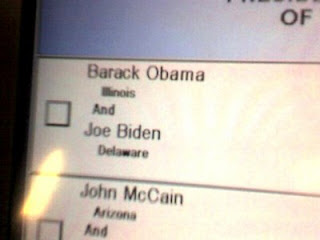 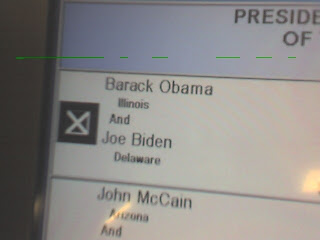 Right before I cast my final ballot. 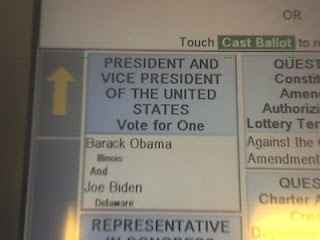 Today was history in the making and I was SO GLAD to be part of it.
Posted by Dankwa Brooks at 6:00 PM No comments:

This year Halloween fell on a Friday so this seemed like the perfect opportunity to create a film that captured the impish, the mischievous, the prankish, the puckish, the pixilated, in other words drunk people in costume. To be fair not all of them were drunk, but they were having a good time and so did we.

This project was a “collabo” between NBE and Central Pop Images. We went downtown Baltimore (is there any other place?) to see how many people we could get to give us permission to tape them and there were many. The people were more than eager to tell us about their costume and even act the part a little. One “Joker” even did a whole scene from The Dark Knight.

As soon as we edit the film we will put it on the Internet for everyone to see, until then, enjoy our slide show below :-)


Posted by Dankwa Brooks at 9:03 PM No comments: