Below is a great article describing what I think are a lot of legitimate reasons why screenwriting and novel writing are different skill-sets.


Novel writing is more detailed to give you visuals and screenwriting is  mostly dialogue and situations. It's up to the film director to create the visuals.

Novelist Gillian Flynn has made Gone Girl a hit—not once, but twice. The film adaptation of her 2012 best-selling book has earned $77.9 million at the box office as of press time, taking the top spot both weekends since its release. The fact that Flynn wrote the film’s screenplay—which has garnered critical raves and could earn her an Oscar nod—lands her on a tiny list of authors who have successfully brought their books to life on the screen. (Only five have won Oscars for doing it.)

It’s a wonder more authors don’t make the jump to screenwriting, especially when studios are hungrier than ever for popular literary brands such as The Fault in Our Stars and The Silver Linings Playbook (not to mention, you know, The Hunger Games). So why don’t more novelists adapt their own work? Short answer: They’re usually bad at it.

”The two big differences between books and movies are pace and perspective,” says screenwriter and cohost of the popular Scriptnotes podcast John August (Charlie and the Chocolate Factory). ”Novels can luxuriate in internal moments of indecision and longing. Movies keep chugging along at 24 frames per second.” Flynn’s adaptation—which August says he ”desperately wanted to write”—soars because she was willing to trim the fat, cutting subplots and even characters.

”You start making the cuts that are really painful,” Flynn says of her kill-your-darlings approach. ”There are certain scenes that I would just hang on to. I knew, ultimately, they were going to go. I just couldn’t quite do it yet.” Through a series of drafts and five-hour phone calls with director David Fincher—”He very much likes to see the beginning, middle, and end of a scene”—the final product came together. ”There was something thrilling about taking this piece of work that I’d spent two years painstakingly putting together, taking a hammer to it, bashing it apart, and reassembling it into a movie,” she says.

Flynn’s agility, however, is uncommon. ”Usually I don’t want my authors to take a pass at writing screenplays because it’s a different skill set,” says literary agent Douglas Stewart, who represents Silver Linings author Matthew Quick. (Director David O. Russell earned an Oscar nomination for writing the adaptation.) ”A lot of authors want to do it, and I think it’s a rare case where an author should do it.”

Creative control aside, screenwriting holds financial appeal for authors. Rights to a novel are pretty cheap—optioning will often earn writers less than their initial book advance—but a screenwriting assignment can pay well into six figures. Yet an author pushing to adapt her or his own novel can backfire; insisting on right of first refusal before the development deal is finalized can put the project in permanent limbo. Studios, agents say, only want authors involved in the screenplay if they’re A-listers. (And even then it’s risky: Jonathan Tropper’s recent adaptation of his novel This Is Where I Leave You elicited lukewarm reviews and failed to impress at the box office. That may not be his fault, but it doesn’t exactly put studios at ease.)

All that said, Gone Girl could be a harbinger of a shift in industry thinking on the matter. Eleanor & Park‘s Rainbow Rowell is writing the film adaptation of her beloved coming-of-age tale for DreamWorks Studios, while Beautiful Ruins author Jess Walter is co-writing a script version of his book with director Todd Field (Little Children). Could one of them be the next Gillian Flynn? ”The smart novelist writes the best book she can and lets the movie be the best movie it can be,” says August. ”There’s no victory in a faithful adaptation if the result is mediocre.”

Posted by Dankwa Brooks at 6:03 PM No comments: 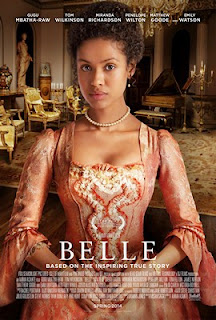 Summary: Set in 18th century England, Dido Belle, the illegitimate mixed-race daughter of a Royal Navy officer, lives in poverty with her mother in England. After the death of her mother, Dido's father takes her to the family estate, placing her in the care of his uncle, Lord Mansfield, the Lord Chief Justice and his wife, who live at Kenwood House estate in London. Though the social mores of the time make Dido an outsider, she is educated and raised in the Mansfield house as an aristocrat alongside her cousin Elizabeth. (Portions from Wikipedia)

Review: Belle is a wonderful film at its core a portrait of a woman born into privilege, but can’t exercise her full privilege because of the color of her skin. The film establishes early on that Dido is an heiress, her father having left her a large portion of his estate. She does not need to get married like her cousin Elizabeth because she is already rich. Because of the time of 18th century all women must be married to be “proper” she and her cousin, who is more like her sister, go about the courting rituals even while Dido is slightly discriminated against. I say slightly because her uncle, the man who raised her Lord Mansfield, gives her every privilege he can without upsetting social standards of the era.


As the film opens up with the subtitle: “The year is 1769. Britain is a colonial empire and a slave trading capital” you can tell that they are going to mention slavery. There are NO slaves in the film, yet the story deftly weaves in the story of Gregson v. Gilbert aka the Zong Massacre. Dido is a woman of means so she could have stayed above the fray and lived her entitled life, yet she becomes very interested in the case and especially a young man, John Davinier, involved in the case. Her burgeoning relationship with Davinier is a ripe love story waiting to happen as the portrayers of Belle and Davinier have AMAZING chemistry. Their chemistry makes you root for their love story even though Dido agreed to marry another man. Yes there is a love triangle, but it’s never played for melodrama and the other issues of the story, the case, the social standing of Dido and her cousin Elizabeth, the wonderful sisterhood Dido and Elizabeth share help make it a well rounded story.

The performances in the film are great as well. Tom Wilkinson, who is great in like everything I’ve seen him in, does another great job here as well and this time he gets to do it in his native tongue (He always plays Americans). Sarah Gadon is great as Dido’s cousin Elizabeth, a flustered young woman because she must find a husband to maintain her social standing. Because Dido does not need a husband this causes minor jealousy, but not much. At the core they are sisters and they show that. Sam Reid as John Davinier is terrific and imbues passion and dedication not only to his case, but to Dido. His performance makes you not only believe, but feel his devotedness.

This film, as it should be, belongs to the talented Gugu Mbatha-Raw who plays the title character Belle. From the moment you see her as an adult you witness charm, intelligence, at times a fierceness and always effortless grace. Without saying a word you can tell that this is a woman of intelligence and elegance. This was the first Lead role I’ve seen her in and she was magnificent.

I would be remiss if I didn’t mention the wonderful directing job by Amma Asante and her design team Production Designer Simon Bowles and Costume Designer Anushia Nieradzik who brought this period piece to life. The aristocrats of Belle never looked or lived better. All the costumes beautiful, all the homes lavish. Under Asante’s direction the film expertly weaved the facets of Dido’s maturation, the love story, as well as the case of the Zong Massacre into a tale that could have easily seemed bloated or lack—direction, yet did not.

I’m not a fan of films from the Romantic Era (Romanticism), but the good buzz about this film featuring a woman of color drew me in and I loved it. Belle is a terrific film.

Posted by Dankwa Brooks at 4:34 PM No comments:

Safety on the Set - The Story of Sarah Jones [VIDEO]

Ever since this tragedy happened I’ve wanted to write about it. When I read about the details I was just astonished at what seemed like an egregious disregard for safety. There seemed to be so many simple precautions that could have and should been taken in case something like what unfortunately did happen—happened. One person was killed, but several others were injured, all in the name of making a movie.

As I’ve stated before, “I’m aware that sometimes as an independent filmmaker you must also try to get some footage “guerrilla style”, and don’t have money or time to get the proper notifications and permits, but sometimes you must be smart and err on the side of caution and safety.”

Back in February 2014 The Hollywood Reporter wrote an excellent piece (Linked below) about the tragedy and in October 2014 the ABC News program 20/20 did a story about it which includes never before seen footage of the actual train collision as well as interviews with Sarah’s family and co-workers.

You can watch the multiple 20/20 segments below


FEBRUARY 2014
Sarah Elizabeth Jones was a camera assistant on the film Midnight Rider when she was struck and killed by a train on set in rural Georgia February 20, 2014. The Hollywood Reporter did an extensive feature on the accident HERE

My Twitter friend Cinematographer Cybel Martin wrote a great related piece. Can Guerrilla Filmmaking Become an Addiction? My Thoughts on the Tragic Loss of Sarah Jones

JESUP, Ga. — A plea agreement was reached on Monday in the “Midnight Rider” case in which director Randall Miller was sentenced to two years in jail and executive producer Jay Sedrish was sentenced to 10 years probation.


Each was charged with involuntary manslaughter in the Feb. 20, 2014, death of Sarah Jones in a train accident on the set of the movie “Midnight Rider,” a biopic of singer Gregg Allman. They entered their guilty plea just as jury selection was set to begin at the Wayne County Courthouse.