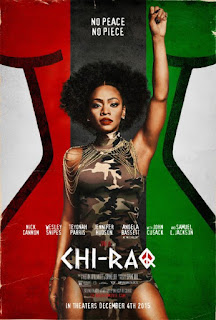 Based on Lysistrata by Aristophanes

Summary: Chi-Raq  is a satirical musical drama set in Chicago, the film is a satire that touches on the gang violence prevalent in some neighborhoods on the city's south side, particularly that of Englewood. The film is based on Aristophanes' Lysistrata, a Classical Greek comedy play in which various women withhold sex from their husbands as punishment for fighting in war. The name "Chi-Raq" is a portmanteau of "Chicago" and "Iraq" as well as an endonym commonly used by South Side residents to liken the area to a war zone due to its extremely high crime rates.

Review: I don’t think I’m speaking out of school when I say Chi-Raq is Spike Lee’s most significant work in years. Spike returns to his social issues roots as only he can. The film is a satire and has humor, but it’s still very serious. The first part of the film deals with the murder of a child from a stray bullet. A bullet fired by warring gangs. The film touches on all the gang violence and gang mentality without being another “hood film”. Yes there is explicit language, drinking and smoking, but most of it is told in a rhyming scheme. Yes, most of the dialogue is spoken in rhyme. When I read about it, it sounded really off base, but watching the film it didn’t bother me at all. Spike Lee really weaves it in and out and it never comes off tired. Like a theater director friend of mine said, think of it as old Rudy Ray Moore/Dolemite records. It’s an artistic affect, a technique and it works. The films weaves in the humor/satire, rhyming, the messages, real life statistics and still had some of the most powerful scenes in cinema 2015.


Most of that power comes from the across the board terrific performances. Nick Cannon was really good and frankly, far better than I thought he might be. Angela Bassett really brings it as one of the older women in the community who has seen far too many shootings and murders she has some great scenes. Samuel L. Jackson is perfect as the narrator/Greek chorus of the film "Dolmedes". His narration really ties the multiple storylines together and no one can deliver lines like Sam Jackson.


The early scenes with Jennifer Hudson were good, but she really builds to some terrific, powerful scenes as the film goes on. A really great performance.


One of the most powerful scenes in the film was the child’s funeral lead by a spectacular performance by John Cusack. Spike and his editors deserve recognition for crafting a long funeral of a child–yet still making it compelling and moving. I think in the hands of a lesser filmmaker the scene could have really come off as maudlin and dare I say trite. John Cusack really delivers in this scene with a powerful sermon.


The film though belongs to the terrific Leading performance of Teyonah Parris. Her character Lysistrata doesn’t start off as one of the “conscious sisters” you might suspect. Not a ghetto “hood rat”, but not exactly conscious either. Her character has the greatest character arc and leads the rebellion of “no peace, no piece” (even though the film addresses it more explicitly) to a worldwide phenomena. You believe Lysistrata every step of the way in her journey from bystander to leader. Definitely a star-making performance.

I thought Chi-Raq was terrific and a true return to form for Spike Lee. I admit, I didn’t know what to think going into see Chi-Raq, but as I said on social media “I loved it! Everything it did, everything it was trying to say."

COMMENTARY
I have to say that from the start people really got the idea of this movie WRONG, from the community to the prospective audiences. Chicago residents and City Council members had requested that Lee change the name of the film, going so far as to threaten the tax credits that the filmmaker will receive from the city. (Chicago Tribune) Then the lighthearted trailer (which more than likely the studio put together) was released and that caused people across social media to decry that Spike was making light of the extremely high murder rates in Chicago. Then audiences that saw it never got the rhyming scheme or the satire.

As Spike Lee said, he wasn’t making “Menace II Society 2” nor I thought should he. We have seen too many of those type of “hood films” and I applaud Spike for making something artful yet impactful. I think if more people see it, more will get it than not. I saw it in theaters on Opening Day, but as of this publishing Chi-Raq is available across multiple VOD (Video On Demand) platforms. If you’re interested, see it for yourself and make up your mind then. 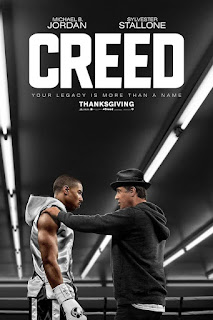 Synopsis: Adonis Johnson (Michael B. Jordan) never knew his famous father, boxing champion Apollo Creed, who died before Adonis was born. However, boxing is in his blood, so he seeks out Rocky Balboa (Sylvester Stallone) and asks the retired champ to be his trainer.

Review: Even though this could be considered the seventh Rocky film, both a spin-off from the original series and a successor to 2006's Rocky Balboa, this film is definitely a spin-off of the Rocky franchise– without being a sequel.

The story is really good and deftly straddles the line of being an homage in places without being a copy. You think you know where everything is going, and while you’re probably right, it’s still so cleverly done that it never feels trite.

Michael B. Jordan is as great as ever as the title character Adonis “Doni” Johnson, the biological son of Apollo Creed born after Apollo died (in 1985’s Rocky IV). Jordan not only gives a great acting performance filled with equal parts vulnerability and strength, but you can tell that he took the boxing training seriously as well. Through Jordan and Ryan Coogler’s direction, Creed has a very realistic portrayal of boxing and boxing training.

Jordan was not the only good performance in the picture as every performance excels. Phylicia Rashād, as Apollo’s widow/Doni’s adopted mother “Mary Ann” and Tessa Thompson as Doni’s girlfriend “Bianca”, the women in Doni’s life were great in the film each bringing their own fortitude to help make Doni the strong man he needs to be. Rashād is pretty much the "mom role", but Thompson is giving a whole character of her own and not just "the girlfriend".

Because every boxing film needs an antagonist boxer, Creed has one in "'Pretty' Ricky Conlan" portrayed by real-life pugilist Tony "Bomber" Bellew. Bellew was also really good and menacing in his role. The real surprise in this picture though was Sylvester Stallone. I repeat this is NOT a Rocky sequel. It is totally Adonis [Creed] Johnson's picture, but even in a small supporting role Stallone gave the best performance I’ve ever seen from him. All of the “awards talk” is completely valid.

Ryan Coogler’s direction is really great as he skillfully crafted the aforementioned “very realistic portrayal of boxing and boxing training” with thrilling suspense. As it should be, the “big match” was the most thrilling part of the film. The punching feels real, the trauma feels real, the agony feels real! The boxing is not the only great thing about this picture. The dramatic notes are equally thrilling. The drama is good throughout, but as he did with the third act in 2013’s Fruitvale Station, the third act in Creed is powerful and strikes all the right notes.

I will echo the buzz online, Creed is a terrific picture, Michael B. Jordan the truth and Ryan Coogler the real deal!


ADDITIONAL INFO
This film conceptualized by Ryan Coogler, took a lot to get pull together. After 2013’s Fruitvale Station (which I reviewed here ) when Coogler signed with WME (William Morris Endeavor, talent agency) he identified Creed as a dream project. While Coogler already had the relationship with Michael B. Jordan (from Fruitvale Station), the agency put him together with Sylvester Stallone. Stallone loved the idea, a spin-off of his original Oscar-winning 1976 film Rocky and felt it was strong enough for him to bring back his signature screen character. Stallone and Coogler then approached MGM’s Gary Barber and Jon Glickman, and they flipped for it. (Some info from Deadline).