The Help - The Review 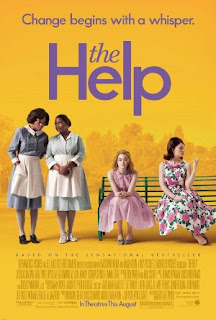 Summary: The Help is a 2011 comedy-drama film adaptation of Kathryn Stockett's novel of the same name. The film is an ensemble piece about a young white woman, Eugenia "Skeeter" Phelan, and her relationship with two black maids during Civil Rights era America in the early 1960s. Skeeter is a journalist who decides to write a controversial book from the point of view of the maids (known as the Help), exposing the racism they are faced with as they work for white families.

The Help is a wonderful film. The direction, the acting and yes the story. As stated in the synopsis this is a comedy-drama and as that it succeeded. The film had A LOT of wonderful performances most notably in the leads Emma Stone and Viola Davis. Viola Davis is THE TRUTH as an actor we all know that. I’ve only seen Emma Stone in one other film (Easy A, a film I did not like), but she did a great job in this film.

Stand out supporting characters were played by excellent actors of their generation Sissy Spacek and the indomitable Cicely Tyson. Cicely’s fine portrayal affected me the most. Jessica Chastain also did a great job and I have to mention that Allison Janney was great as usual too. Bryce Dallas Howard as the villain of the piece was too cartoonish and should have been twirling a moustache. Of all the awards buzz about the acting in the film my favorite portrayal came from Octavia Spencer. Octavia Spencer’s performance was sublime.

In the end, The Help was simply one of the BEST films I’ve seen all year.

Commentary
Now I DID NOT want to see The Help. I don’t like those Driving Miss Daisy/Magic Negro types of movies. For the record, in movie circles, the figure known as a "Magic Negro," is a term that dates back to the late 1950s.


“[Filmmakers] give the black character special powers and underlying mysticism, " says Todd Boyd, author of "Am I Black Enough for You? " and co-writer of the 1999 film "The Wood." "This goes all the way back to 'Gone with the Wind.' Hattie McDaniel is the emotional center, but she is just a pawn. Pawns help white people figure out what's going wrong and fix it, like Whoopi Goldberg's psychic in Ghost"

Now I HATE films like that and from what I saw from the trailer and the TV Spots The Help looked like another Magic Negro movie. Here we go with the black maid helping the white character become a better person—PASS.

As a filmmaker though I will watch ANYTHING…probably not Soul Plane, but I digress. When a friend of mine wanted me to go see The Help with her, I said “Sure”. We never got around to it and that was fine with me. In the interim though blogs I frequent about black film eviscerated that’s the word they used—EVISCERATED The Help. I think I’m a smart discerning guy so I said I’ll reserve full judgment.

Well you saw what I thought about the film above and that is the film as a film,  not the story it portrayed, but honestly I didn’t have a problem with the story either. Yes it was a sanitized version of the past, yes it had a simplified message, but I think that was the intent. It was also a “chick flick” which I don’t really dig either. Never saw Steel Magnolias, never want to see Steel Magnolias.

Now I have to share two varying opinions set forth by a friend I made over on the Nother Brother Twitter account (@NotherBrother) Journalist Candice Frederick on her blog REEL TALK.

For instance, if it's called The Help, why isn't the movie about them? Wouldn't it have been cool if the person writing the movie was a black maid, who probably would have revealed a much more controversial look at the story from the help's point of view? Why is the most interesting thing about the help, or the most realized aspect of their stories, is that they take care of the children of their white employees, or teach them to fry chicken?

I think a huge missed opportunity is that they didn't really dive into--spoiler alert--the fact that Aibeen's son died, or that Minny was getting abused by her husband. Every aspect of their lives was in direct relation to their white employers or to further develop Skeeter's role in the movie. They promote the "story" of The Help as being revelatory, but revealing that there are clearly a community of unhappy maids/housekeepers who take care of their employers' children is anything but that. And, if the story was so controversial in the neighborhood, the employers would have done a lot worse things than have them fired....The historical part of this historical fiction piece seems....blurred.”


“It’s not difficult to glance at the general plot, watch the movie, and think that Emma Stone’s character Skeeter is a magic white lady who makes everything sunshine and rainbows with her spunk and sass, but that’s not how it played for me. Rather, it was the maids that saved themselves. Stone wants to bring their stories to light, and sure, that’s what gets the action going in the first place. But without the firsthand accounts of the maids, there would have been no progress.”

Now I shared those excerpts because I agree with them both, and that is the reason we’re here.

The whole reason ‘Nother Brother Entertainment is in existence is “To further propagate diverse images through development of films” I’m not going to denigrate someone else for making a good piece, even if I don’t completely agree with the ideology.

If we want to see a difference in Hollywood, we have to make a difference in Hollywood. I’ve reviewed several good independent black films here on the blog (Actually here ) and that is the only way we're going to see true change. I haven’t seen many (any?) films directed by a white person that fully captured the black experience anyway. As much as I might try, I don’t think I can tell a female driven story as effectively as a female director could.

Posted by Dankwa Brooks at 11:46 AM No comments: