The Chicago International Film Festival is an annual film festival held every fall. Founded in 1964, it is the longest-running competitive film festival in North America.

Among the dozens of films which will be presented at this year's festival, will be Baltimore born director Danny Green's second feature film, Mr. Sophistication.

The film deals with "a comedian, Ron Waters, who is a Richard Pryor-type of entertainer who makes commentary about the world rather than one-liners. After a self-imposed exile from Hollywood, Ron is back." 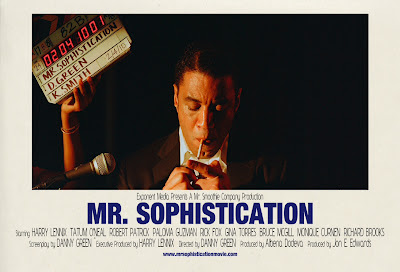 Danny Green, Harry Lennix and the producers Albena Dodeva and Jon Edwards will be present for the screening.

For more info on the screenings see the Chicago International Film Festival, listing for the film here

ADDITIONAL COMMENTS
Danny Green is a personal friend of mine and my social network followers will know him as #MyDirectorFriendFromLA because he didn't want me to say too much about the film before he was ready.

I have to state because I was asked, I had nothing to do with the production of the film.  I just supplied my friend with marketing advice. I’ve been sort of a “social media/marketing consultant” for the film after the fact.

I’ve also seen the film and I’ve given him some advice on the trailer and such. I will write a review for the film soon and I will keep it as honest as possible even though he is a friend of mine.

Until then you can check out the film’s star Ron Waters on social media (I had no hand in any of Ron’s stuff online either. That’s all Ron.)
Facebook: www.Facebook.com/ronwatersesq
Twitter: www.twitter.com/ronwatersesq

Excerpt from a October 17, 2012 interview Harry Lennix did with RedEye Chicago

I really enjoyed “Mr. Sophistication.” For Ron Waters, are you naturally that smooth, or did you have to do some research to get to that point?

[Laughs.] Well, first of all, I want to thank you for your review. It’s extremely nice and you were kind to us and we really appreciate it. I’m glad you liked the movie most of all because it confirms some things that we’ve been waiting to hear for a long time. ... We started it about three years ago. To answer your question, Harry Lennix is not [as] smooth as Ron Waters. [Laughs.] When I was a single man I didn’t walk around with a black suit on and a lot of pomade in my hair or anything. I think I have a bit of Ron Waters in me from people I’ve observed. I was never the smooth guy with lines or anything but I’m fairly witty, so I’m probably a little more—I can’t say off the cuff ‘cause Ron’s very off the cuff too. I’m a little more deliberative. [Laughs.] I can focus in a little bit more than Ron.

Danny wrote the part specifically for you. Why do you think he wrote it this way? I’m unclear if this is based on a true story.

It is insofar as an amalgamation of personalities and biographical figures, but there was no guy named Ron Waters. It’s our kind of blending, or Danny’s blending, of a guy by the name of Jon Edwards, who actually is one of the producers, Richard Pryor and Lenny Bruce. So somebody that can flow on stage talking about real events in real time. And is crazy, like most comedians, but has a kind of definite smooth style or veneer that he puts on, this suit of armor. So he’s really a mix of all of those personalities. So in that sense it’s based on real people, although not on a true story so to speak.

How do you think the fact that Danny was writing for you influenced how he wrote the character?

I am not convinced that Danny was writing it entirely for me. Danny says that he wrote this for me, I believe him of course, but I based a lot of the character, in terms of the execution, on Danny Green. So a lot of his rhythm in terms of his way of speech, that’s really Danny Green, or the pronunciation of certain words. That’s my take on how Danny hears it in his head. An actor’s real responsibility I believe and I think the responsibility of at least the theater and practitioners of it is to achieve the vision of the playwright. It may not be exactly what the playwright had in mind, per se, but what was the playwright or what was the writer, what is the story really getting at? What is the essence of it? To that extent I’ve taken on from time to time characters I would otherwise not play just because I could get behind the story, but in this case I was getting behind both a story and a character. I think the story is reflective of a lot of men in our society, particularly black men who need basically to put on a suit of armor. In this case you’ve got this armor of outward civility and so forth but he’s incapable of lying when he’s on the stage. I think that’s the ultimate quest of the artist is to always be in the truth when he’s on the stage.

What Does a Production Designer Do?


Continuing S&A's mission to give readers glimpses into the worlds of those who contribute their talents to the production and distribution of the many films we all watch and love...

In the simplest terms, as a designer I create and build sets. I come into a film very early. Much of the time it’s the director, a producer or two, the locations manager and myself. We spend time looking at and deciding on locations, which places fit the tone, texture and mood of the story and characters. We talk about what sets make sense to build on a stage, or what locations we’re able to change the appearance of by augmenting the interior and/or exterior.

For me, a large part of the job is about working with the director to understand the characters; who they are, their habits, the things they love, the things they have aversions to, the people in their lives, past and present, their idiosyncrasies and so on. All of those things and more play an important part in creating the world in which the story lives, and from this world come colors and textures. The manifestation of these elements is always different given the project I’m working on at the time. For example, it could be a period piece, a project that is very stylized, or a drama. It’s about pushing the boundaries of where you think they are, in collaboration with the director, cinematographer, costume designer and property master, ultimately presenting a consistent look and feel from beginning to end.

I’ve been working in the film industry for about ten years, give or take. I started out in the art department, which has always been my focus. The art direction was always what I concerned myself with whenever I watched a film – certainly when I was making my own films. It always resonated with me beyond anything else.

Initially, my goal was to be a set decorator; my idol has and always will be Nancy Haigh (set decorator for the Coen Bros). I worked my way up through the art department and started decorating. On the film “Cleaner,” the director Renny Harlin said to me, “You should be a production designer. You don’t have to know where every two-by-four goes, but you do have to have a vision, and you have a vision and a point of view and it’s pretty amazing.”

Up until that point I had never thought about taking the step towards being a designer. After a couple of years decorating and working with many different designers, observing, asking questions and deciding what I would do and wouldn’t, I made the transition to production designer.

At first, I took a lot of low budget features and short films. I was hungry to work and get the experience under my belt. Over the past two and half years, I've had the pleasure and opportunity to work with several gifted directors with whom I share a similar sense of aesthetic. We've created some memorable moments, playing with colors and ideas. I look forward to our next projects together.

For me it’s really important to be working with great, talented directors who have a clear idea of what they want their story to reveal in look and tone.

Really, the most important thing to me in any film is the story – it’s what makes me want to work on a film. I love quirky films just as much as I love serious drama. I also like dark comedy and I always love a good period piece; all these things play a part in me wanting to work on a project. I love film and enjoy what I do and more and more, I’m finding the journey is ultimately the destination in this industry.

With more than 9 feature film projects on her resume, New Orleans-based production designer Hannah Beachler most recently worked on "Fruitvale" for director Ryan Coogler and producer Forest Whitaker. Octavia Spencer, Michael B. Jordan, Tristan Wilds and Melonie Diaz star in the indie drama that's based on the murder of 22-year old Oscar Grant, who was fatally shot by BART police in Oakland, California.

Posted by Dankwa Brooks at 11:31 AM No comments: