I have written at length on this blog about how important film distribution is (Starting with my post Why Distribution is Important).

In April 2012 in a span of about 2 weeks on the indiewire blog Shadow & Act, their Chief Editor & Writer Tambay A. Obenson conducted interviews with people responsible for distributing and marketing black films, two of them to much success and one prepared to be distributed.

APRIL 22, 2012
"Think Like A Man" Producer Will Packer Talks To S&A About The Film's Strong Opening Weekend + "No Good Deed"

RELATED LINKS
ALL of our posts about distribution are here
Posted by Dankwa Brooks at 1:17 PM No comments:

The Best Film I Saw At The 2012 Maryland Film Festival…

Every year I have a favorite film I see at the Maryland Film Festival. I see films at the festival based strictly on the synopses penned by the film festival staff in their guides. Most of the films I have never heard of before, and that is sort of the point. Film festivals are there to gain new films exposure and in most cases secure distribution* so that a wider audience can see them.

This year the best film I saw at the festival were actually THREE! Two of these films I wasn't even checking for like that, but went to see them because I was available and I could. In fact I saw two of these films back to back on the last day of the festival (Sunday, May 6th) after seeing like FIVE feature films already and innumerous shorts. I thought I was pretty burned out on film by then, but I went to see them because…I was available and I could.

The first film I saw was Jeff a film about one of the most notorious serial killers in U.S. history Jeffrey Dahmer.

Like many people I had heard enough (too much?) about Jeffrey Dahmer. I’m not one of those people who love to watch CSI and Criminal Minds and such so serial killers are not really on my radar like that, especially one as despicable as Dahmer. Anyway, I went to see this film not expecting much revelation on Dahmer or the case and BOY was I wrong.

The “Three documentary subjects—a neighbor, a medical examiner, and the interrogator who secured the serial killer’s confession” were totally engrossing. Their interviews intercut with news footage were engrossing and revelatory. In the Q&A after the film the director Chris James Thompson revealed that he started out making one film, the “stark narrative”, but decided to interview several subjects about the case and lo and behold they were the most significant. And that is what filmmaking is about, continuing to craft your film until you think it’s something compelling to an audience and Jeff was just that, compelling…and excellent!

I was having quite the Sunday at the festival because the very next film I saw Compliance was also a film I wasn’t checking for and it too was a revelation.


It’s the beginning of a busy shift at a fast-food franchise in a suburban somewhere. Becky, 19 and attractive, prepares for the onslaught, both from customers and flirty coworkers. Franchise manager Sandra is juggling duties as best she can, but another ball is thrown in the air by a local policeman on the phone who insists Sandra focus on the fact that Becky has stolen from a customer. Sandra agrees to take Becky to a back room and begin the inquiry under guidance from the policeman on the phone. Becky strongly denies the charges, but a personal search is demanded. As the night gets busier, the requests for investigative thoroughness get more outrageous. All the participants ask questions along the way, but compliance continues.

The Q&As at Compliance’s Sundance premiere were so contentious they were later broadcast on Park City’s public-radio station. Indeed, this enthralling film is not easy to watch because the question it raises is so fundamental: when would you stop complying? (Jed Dietz, Maryland Film Festival)

Sounds intriguing right? I was at the festival, I had the time, so why not? But WOW! In my tease for this review on the ‘Nother Brother Facebook page I put “One Word Review: Infuriating” and WOW was it infuriating. The best of cinema will make you feel something and this film made you ANGRY! Every crafted moment you kept thinking “YOU HAVE GOT TO BE KIDDING ME!” In fact at its most infuriating, two women walked out of the screening.

Even though this was fiction based on several real life events, one of which I remember seeing a news report about. This is not just a story that could not happen in real life because almost 100 did. Besides the fact if you think the situation in this film is a total fabrication, the film elicits strong emotion and that is the goal of many a film, to engage your audience on an emotional level and this film does. That’s all I really want to say about Compliance. Because I’m still mad? No, because it was excellent and you should see it!

This next film was truly wonderful.

From the festival guide:


In 1984, Paul Simon worried his career might have moved permanently to a smaller sphere. His last album had not sold well. He’d been listening to a variety of musicians from South Africa, and when his label asked him what was next, he said he wanted to go to South Africa, hire some of these musicians, and see if there was an album in their collaboration. Much of the world had imposed a cultural boycott on South Africa to protest Apartheid.

The African National Congress and others asked Simon not to go. He went anyway amidst protests, and the album that came out in 1986, Graceland, was the most successful of Simon’s career, selling over 14 million copies. It won a Grammy for Album of the Year, and introduced scores of musicians to new markets.

I can’t agree more with Mr. Dietz, everything about this film was engrossing. I was a kid when Graceland came out, I knew about some old rock star, Paul Simon, who recorded with some African guys. I saw some of the media coverage, but what did I really care. I was in to Run D.M.C and L.L. Cool J not some “African music with some white guy”. Through the media coverage I also knew it won a ton of awards, but again it was just not my thing.

The great thing about art though is that it will endure and no matter when or where you are ready to experience it it will affect you. Twenty five years later, I get it. LOL. What Mr. Dietz said about the music being breathtaking was true. In all of the music footage, new and archival you can’t help but groove along. The interviews combined with the archival footage were also great! Even if this album or music is not “your bag” it still is an excellent film and I’m going to say it— this film has Oscar written all over it. (New Addendum below)

Well that’s it, the best films I saw at the 2012 Maryland Film Festival. I have posted more reviews and of the many films I saw, including some of my photos from the festival this year EXCLUSIVELY on the ‘Nother Brother Entertainment Facebook Page

More Info on these films at IMDb (Internet Movie database)


Additional Info
*Secure distribution
The distribution of a film (or movie) is the process through which a movie is made available to watch for an audience by a film distributor. This task may be accomplished in a variety of ways; for example, with a theatrical release, a home entertainment release (in which the movie is made available on DVD-video or Blu-Ray disc) or a television program for broadcast syndication and may include digital distribution. -Wikipedia

The Best Film I Saw At The 2011 Maryland Film Festival…


I Must Talk Some More About ‘Compliance’


The film Jeff is now called The Jeffrey Dahmer Files. Read more about that at The Hollywood Reporter here
Posted by Dankwa Brooks at 12:45 PM No comments:

Another Baltimore Filmmaker to Screen at the Maryland Film Festival [VIDEO] 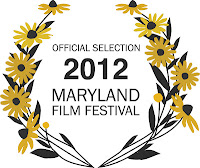 Angel Kristi Williams' film The Christmas Tree is an Official Selection for the 2012 Maryland Film Festival!

Angel Kristi Williams is a University of Maryland graduate and is currently getting a Master’s degree in Fine Arts from Columbia College Chicago.

The Christmas Tree tells the story of a struggling single father (Ka'ramuu Kush, pictured above right) who prepares to spend his first Christmas alone with his daughter (Judaea Brown, pictured above left), but when their tree is lost on Christmas Eve, he’s placed in a troubling predicament.

The film will screen as part of the SHORTS: DRAMA a group of SIX short films playing together at the festival. See the descriptions of all six films at the Maryland Film Festival website here

I've had the opportunity to see The Christmas Tree and it is a really touching piece...and that's all I'm going to say. I highly recommend you see it for yourself at this year's festival!

FEBRUARY 2014
WATCH The Christmas Tree below!


THE CHRISTMAS TREE from Christmas Tree on Vimeo.
Posted by Dankwa Brooks at 8:08 AM No comments: