Scorsese By Ebert - My Review

Scorsese by Ebert by Roger Ebert

When I saw that my favorite movie critic wrote a book about my favorite director I knew I had to read this book!

From the book’s introduction-

Roger Ebert wrote the first film review that director Martin Scorsese ever received—for 1967’s I Call First —when both men were just embarking on their careers. Ebert had never been touched by a movie in quite the same way before, and this experience created a lasting bond that made him one of Scorsese’s most appreciative and perceptive commentators. Scorsese by Ebert offers the first record of America’s most respected film critic’s engagement with the works of America’s greatest living director. The book chronicles every single feature film in Scorsese’s considerable oeuvre, from his aforementioned debut to his 2008 release, the Rolling Stones documentary, Shine a Light.

The book does recount every review Ebert wrote including several of the obligatory interviews with the director during the some of his movie’s press tour as well as some reconsiderations on his earlier reviews. I also thought it would be illuminating to read the thoughts of someone who was there from the beginning of Scorsese’s career or as the introduction puts it “when both men were just embarking on their careers”. They’re generally the same age and have similar backgrounds and are ideally kindred spirits.

Not surprisingly I enjoyed the writings about the Scorsese films I either liked or have an interest in the most. It was also good to read about Scorsese’s early works when he was just starting out. You can read how someone who is considered one of the great American filmmakers started out with struggles with the studios and to get his films made. Through Ebert’s interviews with Scorsese you can see how passionately and deeply he feels about the art of film.

Scorsese’s passion is evident in a chapter I particularly enjoyed, a reprint of a transcript from a master class Scorsese and Ebert had (Part 4: Reflecting; page 157) when Scorsese received an award from the School of the Arts at Ohio State University in 1997. You could really visualize Scorsese’s enthusiasm for film when you read it.

The last chapter of the book, a chapter I was looking forward to “Part 6: Masterpieces” was actually the worst. It was pretty much a regurgitation of what was said earlier in the book. For the record said "Masterpieces" were -Mean Streets, Taxi Driver , Raging Bull, GoodFellas & The Age of Innocence.

In the end though I enjoyed the book and reading about an auteur and whom I consider a master of film.

UPDATE JUNE 2013
You can read excerpts from the chapter I really liked, Part 4: Reflecting, a reprint of a transcript from a master class Scorsese and Ebert had when Scorsese received an award from the Wexner School for the Arts at Ohio State University below!

You can also read other sections of the book!

View all my BOOK reviews at Goodreads

THE MEETING
I met Reina Williams years ago when meeting with a group of creative artists to discuss working on a pilot for a local television show. In the meeting I liked a lot of what she had to say – game recognizes game or for this purpose - art recognizes art.

When we all exchanged info she gave out her MySpace, (remember that?). The one cool thing (only cool thing?) about MySpace was that you could post music tracks there. I really liked what I heard and when you find someone like that you remember them. She is also quite prolific. Her music has already been featured in shows on CBS, NBC, Cinemax, MTV as well as various feature films.

She was also voted "Best Solo Artist" in the City Paper's Best of Baltimore [2010].

THE PART
When it came time to find music for my film The Part I contacted Reina and she graciously let us use her music. (You can read more about that on the blog for that film here )

THE ORIGIN
Since she let us use her music we’ve become friends. I not only became a fan of her recorded music, but her live performances as well. I’ve seen Reina perform at least a half dozen times (You can see one of my cell phone pics below) and it is always great!

After her performances we would talk about doing a music video and tossed around some ideas. When the time came I told her I would direct the video and after a couple more ideas (part of the creative process) it was a GO!

THE SONG, THE STORY
The song is called easily enough THE VODKA SONG. The story for the video was written by Reina herself and I just had to break it down for shooting purposes. My job was to visually make the story just as fun as the song itself.

THE SETS
The video was shot over two days at two primary locations. The great Joe Squared and a location in East Baltimore. The first day was at the former and the second at the latter.

For the first day we had to get there bright and early to shoot the video before Joe Squared opened and we had a lot of great people to come and be extras at that early hour. The second day wasn’t as intensive. We didn’t need the amount of extras and we didn’t need to get there as early. Both days went great and we got every shot that I planned. Something always good for a set. 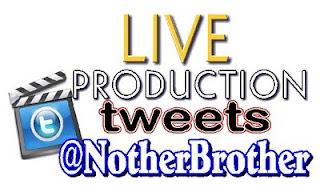 There is a lot of downtime for the director on a set like this while the DP (Director of Photography) and crew set up the lights and the camera for the next scenes to be shot so I decided to take pictures and post them live on Twitter with my own unique brand of commentary. I even established our own hashtag (Twitter people know what that is) where you can STILL get the updates about the video. The hashtag is the easy enough

Ultimately it was harder than I thought it was. Turns out I didn’t have as much time as I thought. There were several directorial decisions that had to be made and it took forever to upload some of the pictures. Next time I think I’ll get a PA (Production Assistant) to do it. LOL.

On both of our social networking destinations I tried to update the progress of the video and still am. I also thanked a lot of the people involved in the production on our Facebook Page.

You can see a slideshow of some of the photos from the sets below and you can always get more up to the minute updates on the post production of the video on our social network sites (linked at the end) as well as see more photos and a LIVE PERFORMANCE VIDEO from the set.

I’m not just saying this because she’s a friend of mine, but I think Reina Williams is on the verge of stardom and (I’ve told her this) it was an honor and a privilege to direct this, her FIRST music video.


You can see a BIGGER version of this slide show here