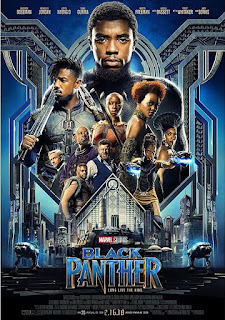 Summary: After the death of his father, T'Challa returns home to the African nation of Wakanda to take his rightful place as king. When a powerful enemy suddenly reappears, T'Challa's mettle as king -- and as Black Panther -- gets tested when he's drawn into a conflict that puts the fate of Wakanda and the entire world at risk. Faced with treachery and danger, the young king must rally his allies and release the full power of Black Panther to defeat his foes and secure the safety of his people.

REVIEW: I never thought that I would see a superhero movie so entrenched in black/African culture on a scale such as this. It is also one of the best origin stories in the MCU (Marvel Cinematic Universe).

If you didn’t know before, you certainly will after watching this film, that Black Panther is a BLACK superhero. Thankfully we now have other black heroes currently in media (Luke Cage, Black Lightning), but while those are television series and urban, this film is definitely something else.

Black Panther is a hugely a self-contained origin story. By “self-contained” I mean that unlike the origin story of Thor (2011), which spread its story between two locales, Asgard and Earth, this film takes place, for the most part in Wakanda.

It’s a film about a hero that’s steeped in family, tradition and honor. While Wakanda is a fictional African country you can see the filmmakers took every chance they could to interline African cultural nuances (I’ll explain more on that later). Wakanda is a futuristic country that was never colonized by outsiders because it thrived in secrecy. That tradition of secrecy is the engine that drives the entire story.

Having established the culture of the story, this is STILL a superhero movie and the action never disappoints! The new king quickly goes on an undercover mission to recover a precious Wakandian export as well as confront an old adversary named Ulysses Klaue. What the king and his cohort discover on that mission is that they have a new even more menacing adversary in Erik Killmonger.

Without giving anything away it is from that point that everything moves fast in the movie and that’s really the only problem I had–it moved too fast. Certain events happen and before you know it–the end.

The star-studded cast in the film never disappoints from the king T’Challa himself Chadwick Boseman, who brings all the regality and statesmanship we saw in Captain America: Civil War (2016) and expands upon it. We also get to see some of his more personal side as he deals with the many challenges of his new throne.

The “challenges” in the movie come from a great trio, Winston Duke as M'Baku steals a lot of the scenes he’s in and the other two Andy Serkis as Ulysses Klaue and Michael B. Jordan as Erik Killmonger pose the greatest challenge to the new king. Serkis had a lot of fun with his role and you can see his Klaue’s main goal is to expose the hidden country that is Wakanda and pillage it.

Killmonger’s goal is aligned with Klaue’s–until it’s not. That’s all I’m going to say except, all three pose worthy adversaries to T’Challa.

The other supporting characters Zuri played by Forest Whitaker and Ramonda played by Angela Bassett lent grace and presence to their characters. Martin Freeman as Everett K. Ross was good too and as one of the only non-black cast members did not overshadow the larger story. Lupita Nyong'o as Nakia was good as well as a spy operative for Wakanda who also happens to be T’Challa’s ex-girlfriend.

The other women in the film standout though. From the awesome Dora Milaje to Princess Shuri, they were terrific.

Letitia Wright as Shuri, T’Challa’s younger sister and the head of Wakandian tech, was an effervescent delight in every scene she was in. She brought genuine laughs without coming off silly as well as projecting that she is also a scientific genius. The Dora Milaje statuesque and magnificent were led by the ever capable Danai Gurira as Okoye.
Gurrira as Okoye was my favorite character in the film and when you see it, you’ll see why.

The entire cast were perfect in their roles regardless if the role was major or minor. Each played a part in fully realizing this origin story.

I can’t end this review without giving props–Mad Props to the filmmakers.

First and foremost I have to mention the director Ryan Coogler, who not only directed, but co-wrote the screenplay with Joe Robert Cole. Coogler proves once again that he is a force to reckon with in Hollywood. He is aided by great cinematography work by recent Oscar nominee Rachel Morrison.

As she stated, Beachler wanted to honor the comics with her designs, and then fill in the gaps with research concentrated on Sub-Saharan Africa, pulling inspiration from Uganda, Rwanda, Burundi, the Democratic Republic of the Congo, and Ethiopia, as well as the designs of Zaha Hadid.

Aided in the rich, bold look of the film was Oscar nominated Costume Designer Ruth E. Carter. The Costume Designer is responsible for every item of clothes worn in the film. Even before the movie premiered people were “cos playing” her designs. (You can see an excellent example of that below in the “Bonus Features”).

For Black Panther Carter referenced the Maasai, Himba, Dogon, Basotho, Tuareg, Turkana, Xhosa, Zulu, Suri and Dinka people in her designs for Wakanda. Both Beachler and Carter wonderfully brought to life this “afro-futuristic” country with real world exuberance.(VIDEO of her talking about the designs is below in the "Bonus Features" as well.)

As you can see the filmmakers painstakingly not only created an entertaining superhero movie, but went through great lengths to make sure that even though this is a fictional African country, it still retains a lot of real life African culture and to me that is the real success of the film. Black Panther is a film overflowing with African legacy, pride and tradition–that also happens to be a great superhero film. It indeed makes you think about Wakanda now and “Wakanda forever”.

JANUARY 21, 2019
I LIVE TWEETED the Feature Commentary in a Twitter thread linked below

BLOG POST:  What Does a Production Designer Do? [featuring Hannah Beachler]

Stories on our TWITTER about the filmmaking of the film

Wakanda Is a Fake Country, but the African Language in ‘Black Panther’ Is Real https://t.co/RtvpsmAPuE</ a> #WakandaForever
— Nother Brother Ent. (@NotherBrother) February 18, 2018

From our FACEBOOK page VIDEO of Costume Designer Ruth E. Carter talking about the costumes of Black Panther 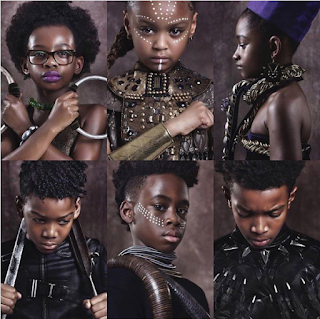 Read more about these photos HERE

ARTICLE: The Costume, Hair And Makeup In Marvel's 'Black Panther' Are A Celebration Of Black Culture And Heritage: From the new Black Panther supersuit to Lupita Nyong'o's Wakanda-honoring knots.

Posted by Dankwa Brooks at 9:01 AM No comments: