Presents a thought provoking piece by writer James McBride
Published Wednesday, 25 January 2012, 5:33PM
you can read it here
Posted by Dankwa Brooks at 12:04 PM No comments: 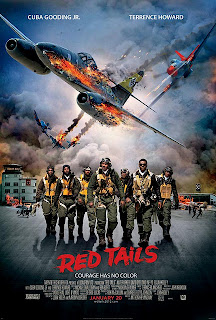 Summary: 1944. As the war in Europe continues to take its toll on Allied forces, the Pentagon brass has no recourse but to consider unorthodox options - including the untried and untested African-American pilots of the experimental training program. Just as the young men are on the brink of being shut down and shipped back home, they are given the ultimate chance to show their courage. Against all the odds, with something to prove and everything to lose, these intrepid young airmen take to the skies to fight for their country - and the fate of the free world.-Culture.com

Review
I’m gonna say upfront that this film has its mad corny and melodramatic moments, but I still enjoyed it. Obviously the most care and attention were given to the aerial scenes and no surprise those were done very well.

You don’t have to wait long to see some aerial fights because the film starts off with that as it introduces you to the main characters. As there are almost a dozen characters to follow in the cast (I posted most of them above) not much character development is given to many beyond the two main characters Martin "Easy" Julian played by Nate Parker (The Great Debaters) and Joe "Lightning" Little played by David Oyelowo (Rise of the Planet of the Apes).

Those two were the heart of the film and gave really great performances. Nate Parker was really good as “Easy” and David Oyelowo stole the show as “Lightning”. Stole it!

Tristan Wilds (pictured right) also did a really good job with his character Ray "Ray Gun" Gannon. The names that are top billed Cuba Gooding, Jr. as Major Emanuel Stance and Terrence Howard as Col. A.J. Bullard are more supporting characters, but did really nice jobs with their scenes too.

Of all the blurbs I read about this film (just blurbs, no reviews) this reaction sums it up "Eh. It was alright if you like Corny Audie Murphy type 50's patriotic war propaganda films." Ed R. @ GetGlue.com

I LOL’d at the reaction because that’s exactly what it seemed like,  a war propaganda film with black folks. You had the standard archetypes the leader, the young kid, the funny guy and the wild one. If you’re expecting a real deep historical film this film ain’t it, but it is entertaining.

I know this doesn’t sound like a resounding endorsement of the film, but I enjoyed it. I wouldn’t be writing this review if I had not.

Commentary
We all know the producer George Lucas is a history buff. His first big hit (yes he a big hit before Star Wars) American Graffiti (1973) was a nostalgic piece and he is also the producer behind the nostalgic Indiana Jones films. I think the “Corny Audie Murphy type 50's patriotic war propaganda films” nature of Red Tails is due to him. I mean he bankrolled the film himself which hardly ever happens in Hollywood ESPECIALLY to this extent.  (Lucas, put up $58 million of his own money toward the film after being turned down by all the major movie houses.) When you bankroll a film like this it’s gonna be made how you like it.

Lucas knows HIS target audience better than anyone and this film wasn’t made only for black people. It was made for everyone, young, old, black, white, Hispanic etc. Again he made the film he wanted to make and let’s hope it’s successful. I mean I’ve seen WAAAY more cornier films like Super 8 and Twilight and Twilight is a billion dollar franchise.

Is this film the dictum on the Tuskegee Airmen? No and NO FILM, narrative or documentary, is going to be. It’s a MOVIE, it’s made to entertain not be your only basis for history. Historical films like this are good for just that the entertainment and maybe it’ll spark broader interest where you can go to your local library or in this day and age Google and Wikipedia. Even those sources aren’t the authority, but good places to begin your research.

As far as this film making or breaking future black films in —shrug. If it fails it won’t help future films like this, but it’s not the end of anything. As with any other black film if it’s a HIT we may get a couple more in that vein (historical). If it FAILS we’ll keep struggling to get our films made like we always have.

There’s an intriguing piece at the website Shadow & Act called “But Does Anyone REALLY Want To See ‘Red Tails’?” stating how emails and such are going around stating that black folk MUST go see this film out some sort of obligation. My feelings on the matter, and you know I have one, is if you want to see the film—see the film. Not out of any obligation. I really wanted to see Red Tails and I’m glad I did.

If you have any more questions or reaction to the film you can add them in the comments below, post them on our Facebook or Twitter accounts and I will respond. I’ll also be adding more comments, reactions and conversation on those accounts above.


Redtails: Honoring the Tuskegee Airmen and taking a break from the usual media buffoonery

The piece I spoke of above “But Does Anyone REALLY Want To See ‘Red Tails’?” with great comments in the comment section. Now that I’ve seen the film I’ll probably be adding my own eventually.You can read it here

Posted by Dankwa Brooks at 11:32 AM No comments: