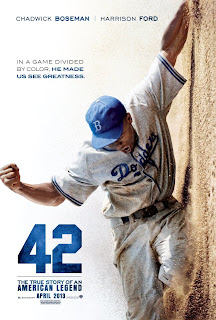 REVIEW
This is a terrific film! I knew about Jackie Robinson, but really nothing about his life and surely nothing about the impact he had on baseball. Like I wrote in the summary “Even though Jackie Robinson is the main character, the story focuses mostly on the 1947 Brooklyn Dodgers season and the story surrounding Robinson's signing with the Brooklyn Dodgers to become the first African-American player to break the baseball color line.”

The other supporting characters were great in their parts as well especially Andre Holland as Wendell Smith the black reporter who is assigned to write about Jackie breaking the color line and Nicole Beharie as Jackie’s wife Rachel.

The film also has lush cinematography by Don Burgess and wonderful direction by Brian Helgeland with crafted moments that treads the line of maudlin, but effectively highlights the racism Jackie Robinson fought.

As it should be though the film belongs to Chadwick Boseman as Jackie Robinson. Boseman does a really great job and conveying some of what the real Jackie Robinson had to go through.

42 is a great feel good movie and really good biopic of a legend.


Note: In its Opening Weekend April 12-14, 2013 42 earned an estimated $27.3 million for its opening weekend, the best premiere for a baseball themed film in Hollywood history. Entertainment Weekly

Email ThisBlogThis!Share to TwitterShare to FacebookShare to Pinterest
Labels: 42, Review

People may know that not only do I love film, but as a creative entity I love anything creative especially when it comes to media.

I've posted about television ads here and at Cool Black Media, and even created a "commercials" playlist at YouTube for some of my favorites.

"Real Beauty Sketches" was a campaign by advertising agency Ogilvy & Mather [Brazil] and filmed by John X Carey of the production company Paranoid.

This ad below is quite frankly one of the best ads I have seen in a long time. As my Twitter friend Cinematographer @CybelDP might say #AdWin!

Also shout out to Twitter friend @Merlange for retweeting this ad
Posted by Dankwa Brooks at 11:54 AM No comments:

Email ThisBlogThis!Share to TwitterShare to FacebookShare to Pinterest
Labels: video 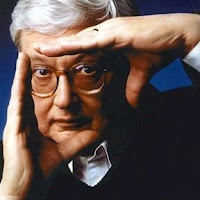 I don't write many remembrances for this blog, but in this instance I had to for Roger Ebert was my favorite film critic.

I don't read reviews before I see a film, but afterwards I do and what Roger said more often than not mirrored my own thoughts and those that know me know that I am discerning.

On the rare occasions, when I'm on the fence about a film, I would go straight to Roger's review to be the decider.

I enjoyed his TV show with both his regular co-host Gene Siskel and then Richard Roper and was sad that he had to leave the air due to his health problems.

I became such a fan I even read several of his books and still plan on reading more I enjoyed his writing so much.

Apart from enjoying his reviews I just enjoyed his writing. Roger was an accomplished journalist who could tell a story without getting pedantic.

Having majored in film and minored in journalism in college I guess I appreciated every facet of Roger's talents.

Due to his health problems Roger lost his audio voice years ago, but in later years I still appreciated his written voice and his voice will be missed. 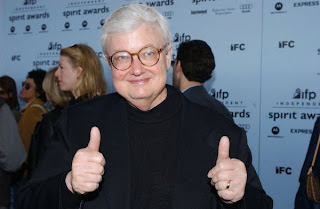 At the blog Reel Talk Chaz Ebert Issues a Statement on the Death of Her Husband Roger
Posted by Dankwa Brooks at 4:41 PM 2 comments: 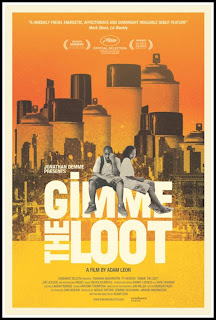 Summary: Malcolm and Sofia, two determined teens from the Bronx, are the ultimate graffiti-writers. When a rival gang buffs their latest masterpiece, they must hatch a plan to get revenge by tagging an iconic NYC landmark, but they need to raise $500 to pull off their spectacular scheme.

Over the course of two whirlwind, sun-soaked summer days, Malcolm and Sofia travel on an epic urban adventure involving black market spray cans, illicit bodegas, stolen sneakers, a high wire heist, and a beautiful, rich girl’s necklace that is literally their key to becoming the biggest writers in the City.

Review: Gimme the Loot is one of those special films that at first you wonder where it’s going, but soon you start to fall in love with the characters. Those characters in this film are Malcolm and Sophia.

Malcolm and Sophia are two teens worried about teen things. The most important thing in their teen lives is graffiti. All adventures we follow are related to this and their “spectacular scheme”.

‘Loot’ is a wonderful “day in the life” of teenagers that we’ve seen before, but this time in an urban setting and with black teenagers that doesn’t involve gang violence. It shows a story about urban life that’s not all about gangs, guns and crack. Gimme the Loot is a marvelous, funny and touching story that has you at the end wishing this couple of friends have everything their hearts desire.

COMMENTARY
I have to add that as a native New Yorker this film has one of the most real depictions of urban New York as I have seen in cinema since probably Do The Right Thing.

Posted by Dankwa Brooks at 11:39 AM No comments: