This is a blog for our film production company, but I also post many informative articles and links about film. To that end I started posting reviews for films that I liked and thought other people should see. The reviews are mostly for independent films that have little or no budget for marketing. If I thought they were good then surely other people should see them too!

Below are links to our most popular reviews. Click the posters below to check them out!

Click the graphic below to read ALL of our reviews

Posted by Dankwa Brooks at 1:05 PM No comments:

What It Was Like To Write For ‘The Cosby Show’

From Written By the Official publication of the "Writers Guild of America" comes a great feature article about what it was like to write for the classic sitcom The Cosby Show.

The Cosby Show was an unequivocal hit, but as the Written By article can attest, with excellence there comes certain caveats.


The Cosby Show is an American television situation comedy starring Bill Cosby, which aired for eight seasons on NBC from September 20, 1984 until April 30, 1992. The show focuses on the Huxtable family, an affluent African-American family living in Brooklyn, New York.

According to TV Guide, the show "was TV's biggest hit in the 1980s, and almost single-handedly revived the sitcom genre and NBC's ratings fortunes". The Cosby Show is one of three television programs (All in the Family and American Idol being the others) that was #1 in the Nielsen ratings for 5 consecutive seasons (the second season to the fifth season,1985-1990).—Wikipedia

As you will read, Dr. William H. Cosby better known as Bill Cosby insisted upon excellence and what bore from it was not only a classic sitcom, but one of the most successful series in television history.

Bill Cosby Producer Breaks Silence: "The Legacy of the Show Is Very Important to Me"

"Obviously it’s a challenging time... but I’m hoping that people will still be able to watch the show and identify with the Huxtables."

Bill Cosby's longtime producer has weighed in on the disgraced star and his legacy in light of the dozens of rape allegations levied against Cosby over the last year.

After promoting his Starz series Survivor's Remorse at the Television Critics Association summer press tour on Friday, Tom Werner spoke with The Hollywood Reporter, brushing off talk of Cosby specifically but emphasizing that The Cosby Show remains important to him.

"I don’t really want to comment on it," Werner told THR, when asked about Cosby. "The legacy of the show is obviously very important to me because the show was a groundbreaking show and it portrayed a middle-class African-American family in a very positive way. It had a lot of stories that resonated with families because people watched it together. Obviously it’s a challenging time for Bill Cosby and a challenging time for the show, but I’m hoping that people will still be able to watch the show and identify with the Huxtables."

Along with partner Marcy Carsey, Werner worked with Cosby on both The Cosby Show and the shorter-lived Cosby under their independent sitcom factory Carsey-Werner. The duo have remained quiet about the scandal for better part of the last year, though they did release a statement last November. “The Bill we know was a brilliant and wonderful collaborator on a show that changed the landscape of television," they said at the time. "These recent news reports are beyond our knowledge or comprehension."

The case against Cosby has grown considerably since then. And The Cosby Show's legacy, at least at the moment, does not look particularly salvageable. TV Land and BET Centric both yanked repeats in light of the scandal — Bounce TV similarly axed Cosby airings — though the series has yet to be removed from streaming services.
Posted by Dankwa Brooks at 11:00 AM No comments:

Wow, it’s been exactly a month since the 2012 Maryland Film Festival (May 3-6th) and I think I finally recovered. LOL. In short my weekend was: 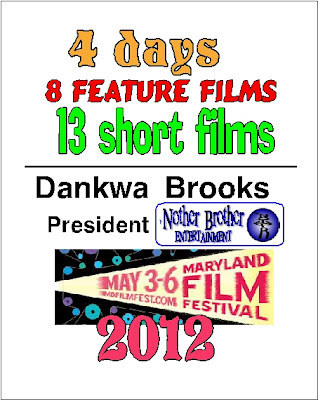 
Starting in 1999, the Maryland Film Festival is an annual four-day event that takes place the first weekend of each May, presenting top-notch film and video work from all over the world. Each year the festival screens approximately 50 feature films and 75 short films of all varieties -- narrative, documentary, animation, experimental, and hybrid -- to tens of thousands of audience members.

Celebrity guest hosts from outside the world of film are also invited to present favorite films, including musicians such as Harry Belafonte (pictured below), Ian MacKaye, Branford Marsalis, Will Oldham, Jonathan Richman, and Bill Callahan.

My weekend started early on Thursday with the festival’s Opening Night Shorts & Party.

Every year the festival opens with a bunch of short films and then a party. Of all my years of attending the festival, approximately half of its 14 year existence, this is the first year I went to the full festival ALL FOUR DAYS. It is also the first time I went to the Opening Night & Closing Night Parties. So this year I truly had the complete festival experience.

During the festival I also shared my experience with the people who follow ‘Nother Brother on our social networks.

Even though the stuff I tweeted is lost in the thousands of tweets in the “Twitterverse” a lot of what I posted included pictures are still on the ‘Nother Brother Facebook page, including ALL of my reviews EXCLUSIVELY. You won’t find them on the blog…well you will find the BEST one I saw reviewed here, but other than that all the reviews are there including the Baltimore shot film LUV starring Common.

Even though seeing all those films in a weekend was tiring, I still enjoyed it especially seeing all my local filmmaker peers. Below is what I posted on Facebook the day after the festival ended.


I truly had a blast at this year’s Maryland Film Festival and I have to say a GREAT job by the festival programmers for I truly saw some great films that I don’t think I would have been checking for otherwise.