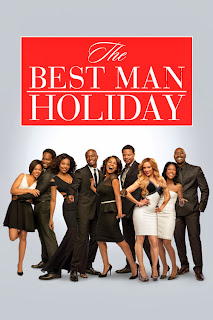 SYNOPSIS
After fifteen years, college friends reunite over the holidays and learn that not all their lives have gone in the directions they had hope.

They were good actors then, but like their characters you can really see how they have matured. It is those actors that elevate the story into what could have been an average story of personal turmoil into a really heart tugging film. This film is more drama than comedy and thus the dramatic moments are really heartbreaking.  Yes the film is a real tear jerker.

Each actor of the ensemble gets their opportunity to shine and it all ties together in the main motifs of the film. What I liked about the film was its motifs of family, friendship, brotherhood and most importantly religion. There have been many other films with a religious component, but they often come off as heavy handed. Holiday dealt with it in a manner that was organic to the story, to the characters and tied into the first picture. A really great balance.

What may have led to the equilibrium of the dramatic and religious components was the comedy! Yes it’s “more drama than comedy”, but the comedy is really great and comes at just the right moments. The writer/director Malcolm D. Lee did a great job at making sure that as down as you may get by the dramatic elements, some comedy is coming to lift your spirits.

The Best Man Holiday is a really good picture that reunites a group of friends that we liked last time, but really grow to love and empathize with this time and perhaps look forward to seeing again. 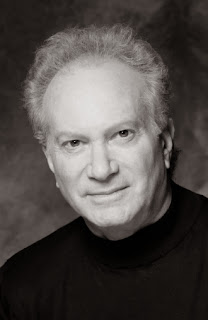 Field was one of my first entrees into REAL screenwriting. I was writing “scripts” before, but none lacked the proper screenwriting format.

I first heard about Field while studying screenwriting at Morgan State University. Field wrote eight best selling books on screenwriting and SEVERAL of his books were required text in several of my screenwriting classes.

In fact when anyone asks me about screenwriting I tell them get his book Screenplay, considered the bible of screenwriting.


Many people think they know how to write a screenplay (for short or feature films) or a teleplay (for television series), but they don’t. It’s kind of a regimented format that should be mastered BEFORE trying to alter it with new storytelling techniques.

Syd Field broke down what it took to make a successful screenplay (in format at least, if not content) and for that I and millions of other screenwriters Thank Him. May he Rest in Peace.

November 20, 2013
I took this picture of my bookshelf in honor of Syd Field. You can see my copy of Screenplay amongst my other screenwriting texts. 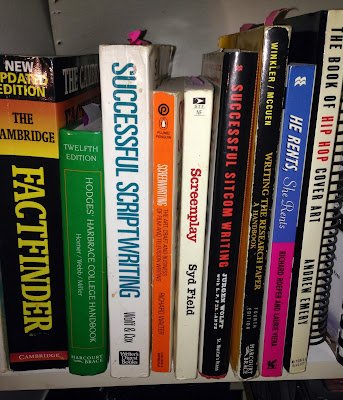 Posted by Dankwa Brooks at 3:38 PM No comments: 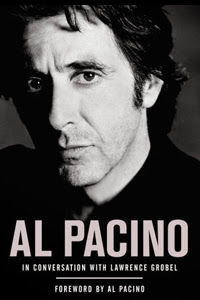 Al Pacino by Lawrence Grobel
My rating: 4 of 5 stars

As Pacino himself writes in the Foreward “I had not yet said yes to our first interview, but when I read his interview with Marlon Brando on Brando’s island in Tahiti, I was impressed.” Since that day in 1979 when he agreed to the interview, the two have become good friends and over the years they did many casual interviews.

Through these nine interviews, all the way up to 2005, you can see what kind of friendship they have and what kind of love and dedication Pacino has for acting.

I personally became impressed, before reading this book, when I read several bits of trivia* about his role in Dog Day Afternoon.

"Although he had initially agreed to play the part of Sonny [In Dog Day Afternoon], Al Pacino told Sidney Lumet near the start of production that he couldn't play it. Pacino had just completed production on The Godfather: Part II and was physically exhausted and depressed after the shoot. With his reliance on the Method, Pacino didn't relish the thought of working himself up to a state of near hysteria every day."

I’ve seen The Godfather films dozens of times, but had only recently seen Dog Day Afternoon and I could not believe he did what I personally thought were his most phenomenal and disparate acting performances—back to back!

Even though he eventually accepted the role in Dog Day Afternoon "halfway through the production, Al Pacino collapsed from exhaustion and had to be hospitalized for a short time. After production was completed, he decided to stop doing films for a while and return to stage work."

I knew then that the man was acutely dedicated to his craft and that was one of the reasons he was so good at it.

Throughout the interviews in this book you get to witness more about his dedication to the craft and his express love of theater especially “The Bard of Avon” William Shakespeare. You could tell that even though he has made millions off of movie roles he could easily be just as happy touring the country doing theater. A fact his now old friend and writer stated as he wrote in the final chapter of the book. I have only quoted several passages below.


And yet, Pacino is different. He still can’t wrap himself around the idea of doing something strictly for the money…He can’t take the millions and run when the script doesn’t capture his imagination. He’s a throwback to a time when artists did what pleased them, what inspired them, and if anyone liked what they did, fine with them. But if they didn’t, it shouldn’t matter…Because it’s not about money. It’s never been about money, with Pacino. It’s about how he feels inside his body and his head. It’s about his art. And in age of commerce, Al Pacino just may be the last artist standing.

That pretty much sums up what I thought of Alfredo James Pacino after reading his interviews in this book. He is a dedicated an artisan as I ever seen.

COMMENTARY
I have to state that I WAS NOT looking for a book about Al Pacino, but when I saw this title and read a little more about it I just had to read about whom I think is the world’s greatest actor. I came to that conclusion after reading headlines about an October 2012 Time magazine article naming Daniel Day Lewis the “world’s greatest actor”. After some thought I thought “Did Al Pacino die?”.

View all my BOOK reviews
Posted by Dankwa Brooks at 2:40 PM No comments: