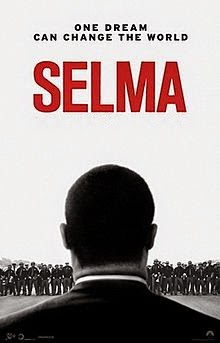 Synopsis: A chronicle of the campaign to secure equal voting rights via an epic march from Selma to Montgomery, Alabama, based on the 1965 marches led by James Bevel, Hosea Williams, and Martin Luther King, Jr. of The Southern Christian Leadership Conference (SCLC) and John Lewis of Student Nonviolent Coordinating Committee (SNCC).

REVIEW: The word I can best describe Selma is POWERFUL. Director Ava DuVernay took NO time getting to the crux of the matter and letting you know, this isn’t going to be all kumbaya. The film as the title suggest is about SELMA and not just Martin Luther King Jr.  Selma deftly incorporates the many, many people it took to make this movement happen. We all have seen the people marching, but not much about the strategy, the organization that it took to coordinate it all. Selma also lets you see the honest discourse and how even when the organizers had many discussions about the direction of their movement, that in the end they all agreed on the same accord. We also get to see the dissertate between MLK and the president Lyndon Johnson.

There were also across the board great performances. David Oyelowo was really fantastic as MLK and gave life and powerful vigor to speeches written by the uncredited director herself Ava DuVernay. (The credited writer Paul Webb’s original contract stipulated that he’s entitled to sole screenwriting credit should he so desire it and he desired it.)

Another one of my favorite performances in the film came from Carmen Ejogo who played Coretta Scott King. She had so many great scenes in Selma and I’m going to say it, she probably wouldn’t have gotten such great scenes from a male filmmaker.

Lastly in a small, yet pivotal role I have to mention Henry G. Sanders who played Cager Lee (the 82 year old grandfather of Jimmie Lee Jackson) who gave one of the most superb singular performances I’ve seen in film 2014.

I‘d be remiss to not mention the costumes by Ruby E. Carter. Ms. Carter, an Oscar nominated Costume Designer, did not disappoint in Selma. Everyone was dressed to perfection in period clothing and by the below side by side pic alone from Ebony magazine you can tell her flawlessness.


The period costumes were essential transporting you to the period.

The King estate also didn’t give the filmmakers license to use any of King's speeches. According to The Wrap "That forced DuVernay to write her own speeches for MLK, and an individual familiar with her contribution to the writing process tells The Wrap that the director performed “a page-one rewrite” on Webb’s original screenplay, changing the perspective of the story, adding nearly a dozen new characters and coming up with a new third act — the most crucial part of any script." I thought DuVernay did a great job at capturing the “essence of King” in the speeches she wrote.

Selma wasn’t all strategy and speeches as it didn’t hesitate at all to show the brutality involved in the civil rights movement and those scenes are where the film holds its power. Her staging coupled with the great cinematography of Bradford Young made crucial scenes stand out. Truthfully I’ve been a fan of DuVernay’s since she started directing feature films and even I had not expected Selma to be so hard hitting.

This was Ava DuVernay’s biggest film to date, most pivotal film to date and despite many obstacles she achieved something special. What makes this terrific film such an achievement is that days later you are still thinking about its message, its power, its history.

Posted by Dankwa Brooks at 12:00 AM No comments: