It what seems like a million years ago, I started my collegiate life at Morgan State University. In a wonderful full circle moment, this fall I returned to teach!

Morgan State University is a public HBCU (Historically Black College and University) in Baltimore, Maryland and is the largest of Maryland's HBCUs.

Even though I transferred after two years, I LOVED my time at Morgan and have always called it my “unofficial alma mater”. As a student at Morgan I marveled at the Black folk of all shapes, sizes, hues and hairstyles all gathered for one purpose–higher learning. It was great to be in the middle of all that unmitigated Black potential. I also loved my time at Towson University, but my time at Morgan as Black folk say “hit different”.

My love of Morgan permutates several levels and layers as Morgan has ALWAYS showed me love. Let me count the ways.

First and foremost, I loved my classes at Morgan, especially studying Black art. As I’ve stated before "I knew about the Harlem Renaissance, but I fell in love with the time period when I studied it in Humanities at Morgan State University."

I’ve spoken to multiple classes at Morgan as a Guest Lecturer, some while I was still a student there.

In as many times, I was also a guest on the campus radio station, WEAA, on several different shows. 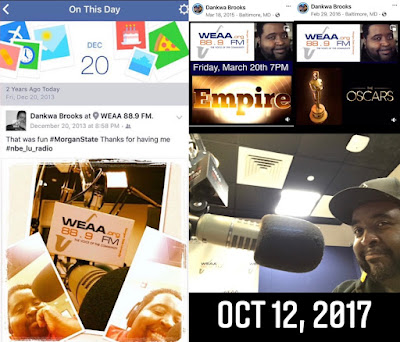 My family also has a long connection to Morgan. My uncle Gilbert is a proud alumnus, and my family has a history of supporting Morgan events. My uncle Jerome regular attends the MSU Choir Annual Christmas Concert.

So going back to teach at Morgan would seem like a no-brainer right? Not necessarily.

See after fourteen and a half years, I took early retirement from Baltimore Police (civilian), to move back home to Brooklyn, New York where I was born and raised.

I moved back home in 2019 and after a whirlwind of success (I’ll explain more about that in a moment) and a pandemic, I received the referral to teach at Morgan. I had to though contemplate even going back to Baltimore to work. My closest friends told me that they KNEW moving back to Baltimore wasn’t a consideration–and it wasn’t, but I had to think about how I could take advantage of this opportunity. Not even adding the extra responsibility of traveling during a pandemic.

Frankly, I don’t think I would have done it for any other school other than Morgan.

Besides speaking to classes and appearing on WEAA, I always maintained my connection to Morgan. After I won another screenwriting contest, that “success” I spoke of, I returned to Morgan to take this picture. 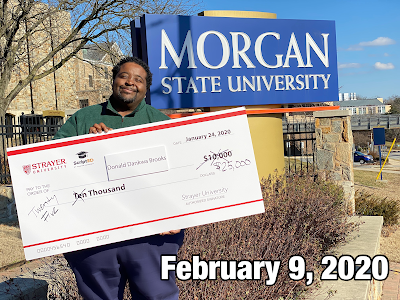 As I’ve said before, I HAD to take this pic in front of Morgan because it’s where I learned screenwriting in the “Writing for Television” program. I could always write good—write well, but I didn’t know a damn thing about PROPER screenwriting until my studies at Morgan State.

I was scheduled to teach at Morgan on Tuesdays and Thursdays and I figured that if I traveled to Baltimore on Tuesday mornings I could go teach and then stay with my uncle Gilbert until Thursday–and that’s exactly what I did.

I spent three days and two nights in Baltimore, the rest of the week I would be home in Brooklyn.

When I finally told my students the last week of classes, they kept asking me “How did I do that?”, “When did I sleep?” stuff like that, which made me chuckle. The answer was a lot of preparation. Just like I prepared their lessons, I had to prepare my commute. Of course, as a filmmaker I documented my experience. Below is an example.

Teaching at Morgan was a wonderful experience, especially now. Even though it was my first semester teaching, it was not the first for my students and fall 2021 was their first classes on campus in 18 months and they were SO HAPPY to be back. The entire campus was happy to be back, everyone on campus followed protocols, even outside. It was challenging to teach for hours in a mask at first, but I got used to it.

I’ve talked to other educators, and it is very different teaching in person than it was over video and I can see that. That in-person interaction is irreplaceable.

To be honest, the Black Lives Matter, social justice protests in the summer of 2020 also played a factor.

My life’s work as an adult has been a focus on film and ancillary media. The mission of ‘Nother Brother Entertainment has always been "to further propagate diverse images through development of films and ancillary entertainment media which includes a presence on social media." Now it is popularly called DEI, Diversity, Equity, and Inclusion. Since last summer literally every company’s focus has been DEI. I’ve been Black all my life so “DEI’ has always been a factor–forever.

I told my students that last week of classes that it was MY HONOR to travel, round trip, over 400 hundred miles to teach them each week. And it was.

In the words of Issa Rae “I’m rooting for everybody black” and the opportunity to teach the next generation of Black minds was simply something I could not ignore or deny. 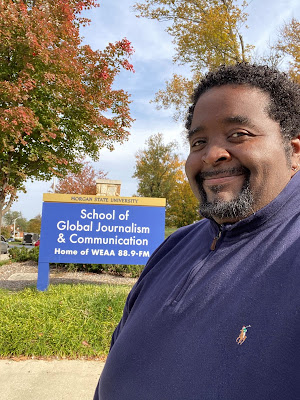