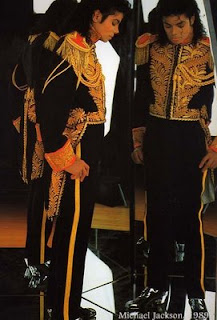 I remember the first time I worked with Michael Jackson. I was at Towson University in the Directing for Film class and our instructor said that one lucky student director would get a chance…ok I can’t keep that up any longer. I’m just kidding. Don’t you hate when people make up crap like that?

Seriously when Michael Jackson died I thought it was some rumor. I had somewhere to go that night and by the time I left CNN hadn’t even confirmed anything more than he had cardiac arrest and was in the hospital. When it was finally confirmed I couldn’t think of my favorite Michael Jackson song. Thriller was my favorite album (isn’t it everyone’s?), but I couldn’t think of just one track that I could call my favorite. Truthfully some of my favorite tracks weren’t even singles (Human Nature and Lady in my Life)


Several days later I finally remembered what my favorite track was and it wasn’t even from Thriller. Man in the Mirror is my favorite Michael Jackson song (from the album Bad). In retrospect Bad is a great album, but like other great Michael Jackson albums it has been totally eclipsed by Thriller.


Despite my joke (ill conceived joke? perhaps) at the beginning many of us never met Michael Jackson or were even lucky enough to see him perform live. Most of our memories are tied to seeing him on television.


I don’t think I know anyone in my neighborhood that wasn’t watching Motown 25: Yesterday, Today, Forever (May 1983) and the “event” that made the special go down in television history. The Jackson 5 reunion and eventual Michael Jackson performance was the highlight of the special. As much as his death has been the talk of the town (world), so too was this performance. Later that same year I had my favorite Michael Jackson memory…and it’s the truth this time.


As a child of the inner city we never had MTV, truthfully that inner city, Baltimore City didn’t even have cable capabilities (Baltimoreans from the 80’s will remember that). We had to get our music video fix on late night shows like Friday Night Videos and Pump It Up! (which came on like 3 o’clock in the morning, but that’s another blog).


It was December 1983 and I don’t know why my grandmother was up that late, (about 12 o’clock) but she was and for the only time I could remember we watched Friday Night Videos together. That night my favorite and perhaps the greatest music video ever came on…Thriller. In retrospect Thriller isn’t even a great song (my opinion), but the video was…ground breaking! I loved the story, I loved the make-up and of course the dancing. Pop, locking zombies? I mean come on who did that back then…ever? The dream ending was also PERFECT. 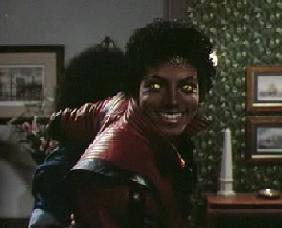 We were both completely transfixed and thought it was FANTASTIC! The Thriller video was also the talk of the town (world) and especially school that next week.


That was 20 something years ago and a music video isn’t so much an event anymore since you can catch one anytime on the Internet or even buy and download it.

There will never be an artist like Michael Jackson. One who could create a music video that could mesmerize a 60 something woman and a teenage boy at the same time. I can’t think of another artist in my lifetime that could accomplish the same feat and become the talk of the town…make that the world.
Posted by Dankwa Brooks at 12:43 PM 1 comment: