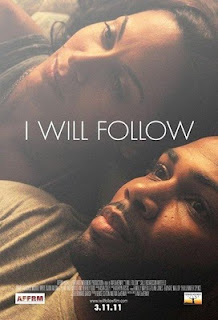 
Written and Directed by Ava DuVernay

Summary: Chronicles a day in the life of a grieving woman, and the twelve visitors who help her move forward.

As I’ve said in the past, I usually post movie (and other media) reviews at Cool Black Media. I don’t usually post movie reviews here at the ‘Nother Brother Entertainment Blog, UNLESS it is an independent film worthy of distinction and I Will Follow is such a film.

THIS is the type of black movie that should always get made and get made often. This is not a movie about black people, but more a movie about people who happen to be black, in a story that’s universal.

The story told here, happens everyday and is happening as you read this. Someone dies and the family has to deal with the aftermath. As usual with the death of a loved one there is conflict within the family for a myriad of reasons and most of them are never about the person who has died, but what they leave behind literally and emotionally.

This movie isn’t all about death and despair, there are lots of light moments and a REAL human story at its center. I’m being intentionally vague because I went into this film COLD. I didn’t even watch the trailer and I think I am better for it. I think you should too, but if you MUST see a trailer, their official website is linked at the bottom of the review.

I Will Follow is a really nice story without a lot of histrionics and sweeping plot twists. That is not to say that there aren’t revelations in the story, but they are all organic and many aren’t revealed until the story is over.

In fact the whole movie just seems real with performances that are organic and true. Salli Richardson-Whitfield as Maye turns in a really nice performance at the center of the story. She deals with the various elements of the day with vigor and determination without being melodramatic. Michole White turns in a particularly strong performance as Fran.

A really nice movie with a lot of good performances. Definitely one of the best black movies I’ve seen all year. This movie keeps it real and that’s a good thing.

Commentary: I was kind of apprehensive about seeing this film and not for the reason you might think. I wrote about this film and the “movement” that promoted and distributed it, AFFRM, quite extensively here on the blog. As I posted in that entry:


AFFRM - the African-American Film Festival Releasing Movement hopes to spread the distribution of black-themed films through black film festivals based in New York, Atlanta, Seattle and Los Angeles including our online contact Reelblack in Philadelphia. The film festivals will share the profits from the film for helping to promote its wider release.﻿﻿

I Will Follow was the first film distributed by AFFRM. ﻿﻿I thought, what if I don’t like the film? What will I do then? Probably nothing. Whether I liked the film or not, the MOVEMENT is what’s important. If I didn’t think it was important I wouldn’t have written about it. If I didn’t like the film I wouldn’t have reviewed it because I don’t diss films on this blog. I don’t diss films because I know what hard work it is to make a film and no matter the result, at least they got the film made!


Writing in Color, 2 of 4: Stereotypes In this episode, the panelists talk about how "The Office," "Parks & Recreation" and "Community" deal with ethnic stereotypes in different ways.

Writing in Color, 3 of 4: Dan Harmon on why he's obsessed... In this episode, "Community" creator/showrunner Dan Harmon discusses why he's obssesed with race Part 3 of 4

Writing in Color, 4 of 4: Writing "race neutral" characters In this episode, the panelists debate whether it's better to include race when writing TV characters or write them as "race-neutral."

External Link-
Found out about this series from the great website Shadow & Act. Click their logo below to check them out.

Posted by Dankwa Brooks at 9:44 AM No comments:

I might be a scholar, but I am by no means a scholar on the subject of diversity. I do bring with me a lifetime of observing trends in the media (Self proclaimed Mediaphile) and always having the black eye. By “black eye” I mean whenever and I mean WHENEVER I see something in the media, television or film, I look for the black person(s). Does it make a difference in the overall enjoyment of the medium? More than likely not, but it is always good to see a vista that is not devoid of diversity.

As I stated before the mission of ‘Nother Brother Entertainment has always been "To further propagate diverse images through development of films." To that end a lot of blog posts on this blog are also devoted to diversity.

I find a lot of stuff on the Internet related to diversity and I will put it here. Starting it off below are two blog entries where I compiled my thoughts on the issue PLUS a lot of information.

June 2015
Recently I started putting more diversity articles on our Facebook Page. Our Twitter Feed is always retweeting diversity in film convos on a daily basis as well. Below is a link to our photo album

Diversity in Hollywood 2011 and Beyond

Diversity in Hollywood 2011 and Addendum


September 21, 2011
From the L.A. Times blog
Will color return to this year's Oscar season?

November 1, 2011
The blog Diversity Ink has reposted the article "The Rise and Fall and Rise Again of Black TV" from the May 20, 2011 issue of Entertainment Weekly. Read it here

Posted by Dankwa Brooks at 9:13 AM No comments:

On that fateful day, September 11, 2001, I was a student at Towson University. That morning I just got out of Chemistry class and I had like a 60-minute break before my next class. I decided to go to the record store (remember those?) and get that new Jay-Z CD .(The Blueprint [1] pictured below) that was just released that day.

I don't listen to the radio (too many commercials and the same 7 songs over and over) so I listened to another CD on the way to the store. After picking my CD I tried to pay with my debit card and it took forever to go through. In fact all of the transactions were having problems. The purchase finally went through and I listened to the CD all the way back to school and in the parking lot until it was time for class.

I was going to my TV Studio Operation class in the Media Center (pictured above) and the note on the studio door said class was cancelled. I ran into one of my professors and said, "What's going on?" He said, "We're being attacked! You can watch it in the studio down the hall”. I said to myself "The hell with that. I'm going home". I went home and like everyone else, I watched the rest of the event (history) on television.

I soon found out that ALL the phone lines were screwed up. I couldn’t make any calls on my cell phone on the way home. In retrospect, the phone lines (used to process the transactions in the record store) were tied up because of the tragedy.

No pictures of what happened, just what was... 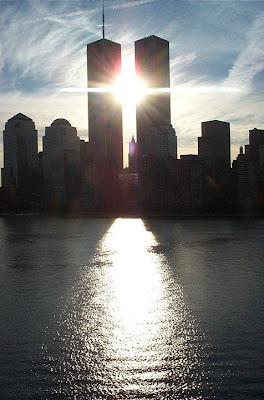 A few weeks ago I took my first trip to the 9/11 Memorial and composed a short film.

Posted by Dankwa Brooks at 8:46 AM No comments: