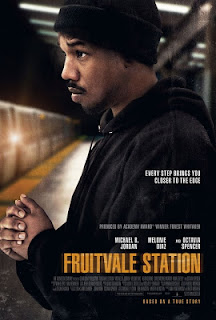 Summary: The film tells the true story of Oscar Grant, a 22-year-old two time convicted felon from Oakland California, and his experiences on the last day of his life, before he was fatally shot by BART (Bay Area Rapid Transit) Police in the early morning hours of New Year's Day 2009.

REVIEW
This film is a portrait of a young, black man and this portrait closely resembles not myself, but a lot of black men I knew—a lot. For whatever reason they just can't get their life together. Fruitvale Station captures ONE day in a young black man's life, Oscar Grant, yet fully captures what most of the other 364 days of the year must be like.

These young men aren't the scourge of society that the media portrays them to be, but loving, kind individuals. ‘Fruitvale’ doesn’t sugarcoat his character as you get to see that he is a good guy and he has friends and family that loves him. You see the good natured side of Oscar, but you also see the immoral side of Oscar’s personality when he’s threatened or hurt.

Most of the film as such is an intimate portrait. You follow Oscar as he goes about his day and thinks about his life. You see his great interaction with the women in his life, his girlfriend, his daughter and his mother. You see the struggles he has to go through with the other aspects of his life.

Things are not all so reflective as the film builds to its inevitable conclusion as that last part of the film...it's about as heart wrenching as you can get.

The performances are pretty great. From the fresh innocence of Ariana Neal as Oscar’s young daughter Tatiana, to the resilience of his daughter’s mother Sophina played terrifically by Melonie Diaz and a superb performance by Octavia Spencer. Superb! My favorite actor from The Help, Spencer gives another great performance in “Fruitvale’. Some of her scenes could have easily gone over the top, but she plays them with the perfect nuances.

The performance of the film, this film, Fruitvale Station, a story about the late Oscar Grant goes to his portrayer Michael B. Jordan. Jordan gives a complex performance that is often times loving and reflective, but when it’s not—it’s not. It’s almost like Jekyll and Hyde. Like I said earlier, when he is threatened or hurt Jordan’s Oscar is a different person. It is that performance that makes the ending of the film all that more harrowing.

The direction by Ryan Coogler is reflective and nurturing throughout and he does a great job with showing those aspects of Oscar’s character, but again, that ending…Coogler does an amazing job of increasing the tension and then showing the eventual heartbreak of the events. A very impressive feature film debut for Ryan Coogler!

Fruitvale Station is a really good movie that will break your heart by the time it’s finished, but you feel like you know the young man, many like him and what they face in this life.

Read more news about the film Fruitvale Station at our Sista blog Cool Black Media here
Posted by Dankwa Brooks at 8:43 AM 2 comments: