Why I Donated to Spike Lee’s Fundraising Campaign 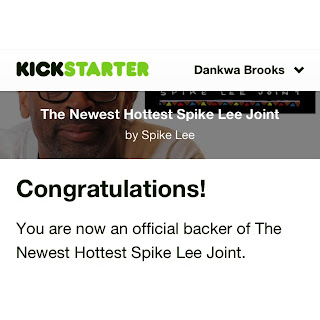 As of this writing Spike Lee has met his fundraising goal of $1.25 Million and I still felt compelled to donate.

I started to think I could be a filmmaker because of people like Spike Lee. Spike Lee wasn’t the only black filmmaker to inspire me to study film, but he sure was the most consistently influential. Throughout college I could always count on a Spike Lee Joint to inspire me in some way, not just his films, but his interviews and his books. It was inspiring for a young, black man to see this other black man not only making films, but speaking his mind. Him being from Brooklyn where I was born and raised didn’t hurt none.

Since he announced his campaign a lot of detractors have cited his fame and celebrity as reasons he shouldn’t be asking us for money. His celebrity, fame and work ethic in film was a constant reminder to me while I was toiling away in college that I could attain such. Even after receiving my degree in film that celebrity, fame and work ethic has inspired me to continue to study film as I venture into indie filmmaking.

Ultimately though, I decided to donate to his campaign because Spike’s films speak to this black man’s soul. 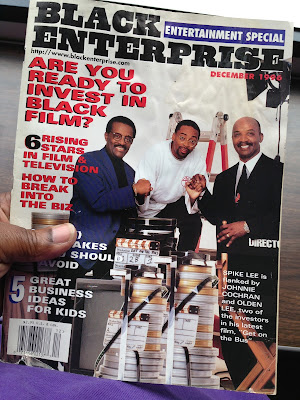 August 29, 2013
I found this December 1996 edition of Black Enterprise magazine while cleaning my house last weekend and thought that it is a PERFECT example of what I meant when I said of Spike Lee that “His celebrity, fame and work ethic in film was a constant reminder to me while I was toiling away in college that I could attain such.” I bought this magazine while I was a screenwriting student at Morgan State University and I still have it!

These kind of African American images kept me going and inspired me in college while I studied screenwriting, transferred to another college to study film and even after college—continue to do so. 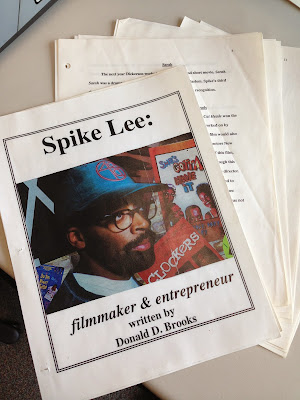 As I was digitizing some of my old papers from college I found the above! This was for a paper for my Business Communications class in my Freshman year at Morgan State. Yet another example of Spike’s influence on me.

ADDITIONAL
Read more of my posts about Spike Lee here